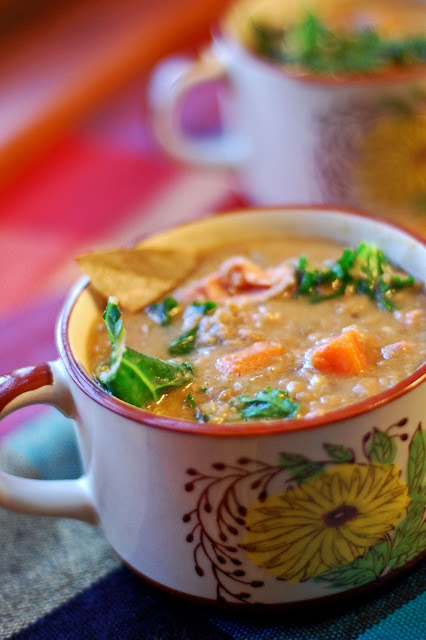 Last week we had a heat wave— and with temperatures in the balmy 40s, I wasn't prepared to post about this warming winter soup. But it's snowing again today, so I'm ready. 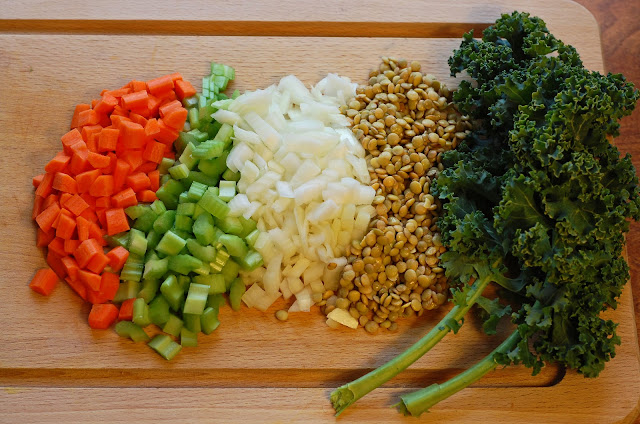 I'd been thinking about making this Ham Bone Soup from the New York Times, which sounded nice and filling. So to that end, I went out and bought myself a ham bone, which I'd never cooked with before, and which I was strangely nervous about buying— what if the butcher asked me what kind of ham or how big of a bone I wanted? What if there was some technical term (hammus corpeus) that I needed to use or risk looking stupid?

The purchase was a total nonevent. It was the bone itself that changed everything: a nice big bone, with a lot of meat on it. 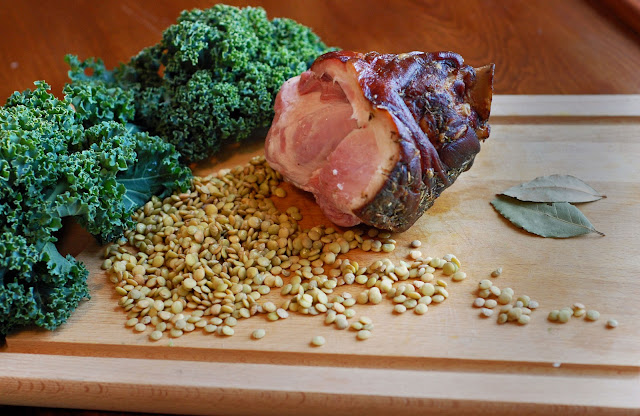 The Ham Bone Soup didn't say anything about meat: the bone just sits there, as the broth leeches flavor and substance out of it. Which sounds lovely, but a bit wasteful for this gorgeous bone.

A split pea soup? Sure, maybe, but I didn't have any split peas, and I did have a big bunch of kale in the fridge. This called for some improvisation, in the form of a thick and savory lentil soup with ham.

1. Heat a large pot over medium-high heat. Add the bacon and cook until crisp, then remove and allow to rest on paper towels.

2. Add the onion, carrots, and celery to the pot. Stir until softened, about 5 minutes. Add the garlic, bay leaf, 1 teaspoon salt and 1/2 teaspoon black pepper; cook, stirring, 30 seconds to 1 minute.

3. Add the ham bone to the pot; cover with vegetable broth. Bring to a boil and simmer, 90 minutes to 2 hours.

4. Add the lentils and simmer for 30 minutes, or until lentils are soft. Meanwhile, remove ham bone and slice meat into small chunks; return meat to pot.

5. When lentils are soft, use an immersion blender to blend soup to desired thickness, or transfer 3-4 cups to a blender and blend until smooth, and return to pot. (As always, use caution when blending hot liquids.)

6. Stir in the kale and simmer until tender, about 10 minutes. Season with salt, pepper and cider vinegar to taste. You shouldn't be able to taste the vinegar, but it will perk the flavor up a bit. Serve with crumbled bacon on top.