This review originally published at the Brookline Patch on February 17th 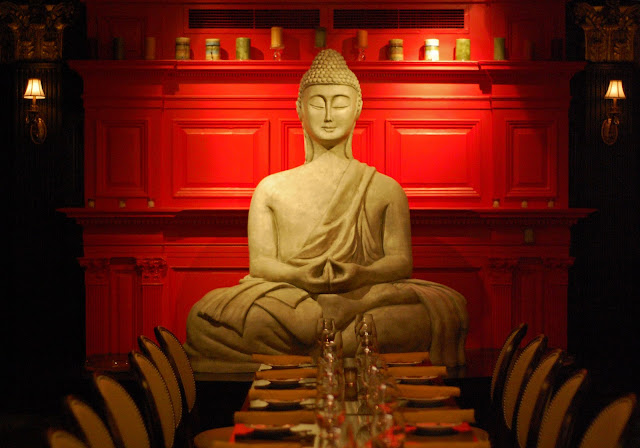 The pan-Asian gastronomic mishmash that is Budda C Asian Bistro sits behind a rather unremarkable sign on lower Beacon Street, in the former Jae’s Café spot. The menu lists everything from Japanese sushi and Korean barbeque to Chinese stir fry and Thai noodles, leaving me to wonder what I’m sure some of you are questioning: given the number of the restaurant’s varied cuisines, could the dishes be authentic, or would the restaurant render anonymous the subtleties of the different Asian food cultures?


With food this good, does it really matter? Indeed, as one of my dining companions astutely remarked: "This place is a culture unto itself."
The place is irresistibly Asian kitschy-chic, and a great place to bring a date. A giant stone Buddha dominates the dining room; sleek white leather seats line the walls in dim lighting; red Chinese latticework covers the windows; a jazzy playlist croons in the background.


In the cocktail lounge, as I hemmed and hawed over a drink selection, our inventive bartender Giovanni took matters into his own hands, whipping up a pre-dinner potable for me in the form of a tart key lime martini ($9). With the exception of the Saketini ($9), the cocktail menu features mostly sweet, fruity drinks, but if that’s not your bag, don’t be afraid to ask for something off-menu from the full bar. There's an ample sake and beer selection too, including the Japanese beer Kirin Ichiban on tap ($4), and its crisp wheatiness perfectly complemented an appetizer of pork dumplings—normally $7 but ours free due to a happy hour special. The dumplings, handmade at the restaurant, arrived hot off the stove, filled with a savory mix of pork and sharp scallions. An appetizer of eggplant stuffed with shrimp ($6), gently fried to produce a delicately crispy exterior, was delicious served with a peppery citrus salsa.


It’s clear to the customer that Budda C puts a lot of thought into buying ingredients and composing dishes. Quality and freshness are paramount—the fish is delivered fresh every weekday, and much of it is sourced from nearby waters; the vegetables are firm and flavorful; the sauces, which at some restaurants can mask flavors with overwhelming levels of salt and spice, complement the ingredients instead of camouflaging them.

The freshness is especially visible in the sushi and sasimi dishes, like the Sashimi Appetizer ($10). Slices of raw salmon, tuna and yellow tail arrived beautifully plated alongside a vivid purple orchid, and so fresh the fish almost melts in your mouth. You’ll find all of the regular players here, and all of it worth a try; I can recommend the delectable spicy tuna maki ($6.50), or the crazy maki ($7.95), a roll of shrimp tempura, avocado, cucumber, roe and spicy mayo.


From the menu, we ordered Beef Bibim Bab ($14), a popular Korean rice bowl served in a stone crock with vegetables, marinated beef, a fried egg and a spicy sauce on the side. The Empress Cashew Chicken ($12) was expertly cooked—the chicken itself was sublimely tender, high-quality meat, while the stir-fried vegetables still retained a toothsome crispness.

We passed on the chocolate-heavy desserts, all some incarnation of cake or brownie, and instead chose to finish our meal with a small decanter of hot sake ($3.75). Light, tart and slightly sweet, it was exactly what I craved after that satisfying meal—and bracing enough to let me brave the cold night air.