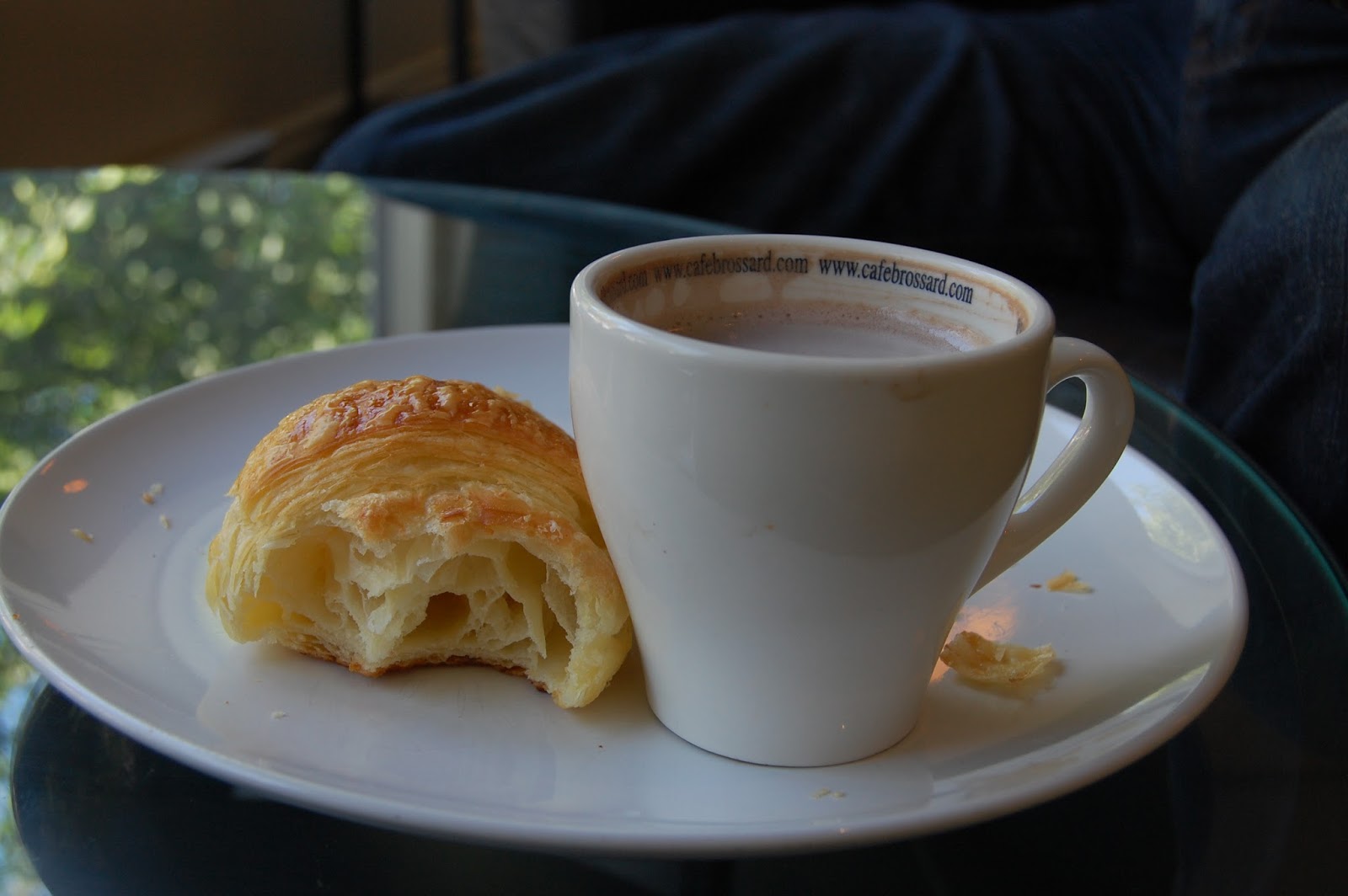 Here is one thing we learned in Montreal: a four-croissant-a-day diet is unsustainable.

Or, rather—I learned this, and Merrick did not. 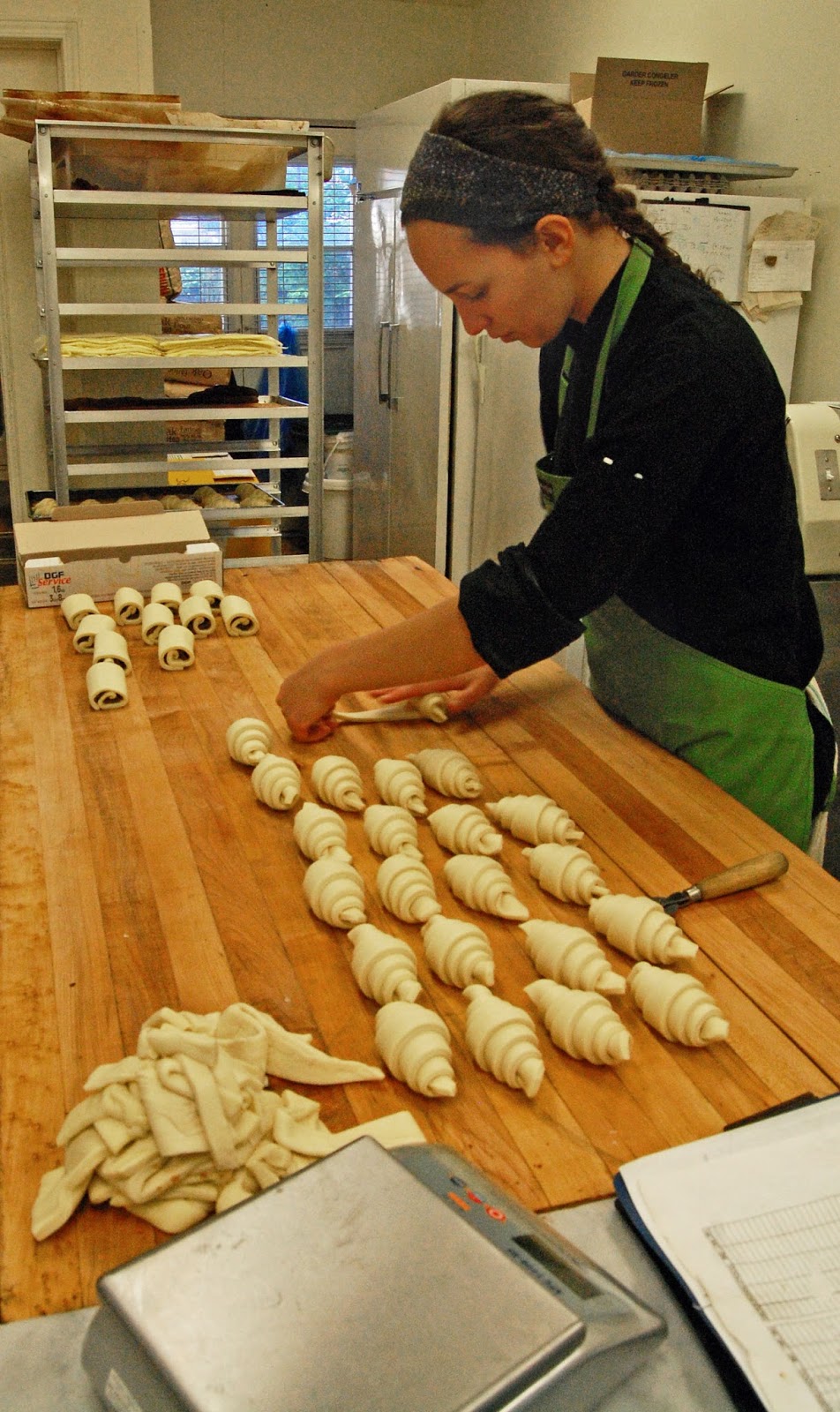 I'm definitely not complaining—I love me some butter.  If I lived in Montreal, I would buy so many croissants every week that I could roll on piles of them like Scrooge McDuck.  But my point is that I saw the amount of butter that goes into these things, and it is only slightly less than the amount of dough involved.  I saw a block of butter equivalent to a mid-size ice sculpture.  I thought it was white chocolate, but then I asked what they use all that white chocolate for, and the very nice pastry chef looked over with a duh expression.  So, that's another thing that I learned—butter does occasionally come in blocks the size of a small Toyota. 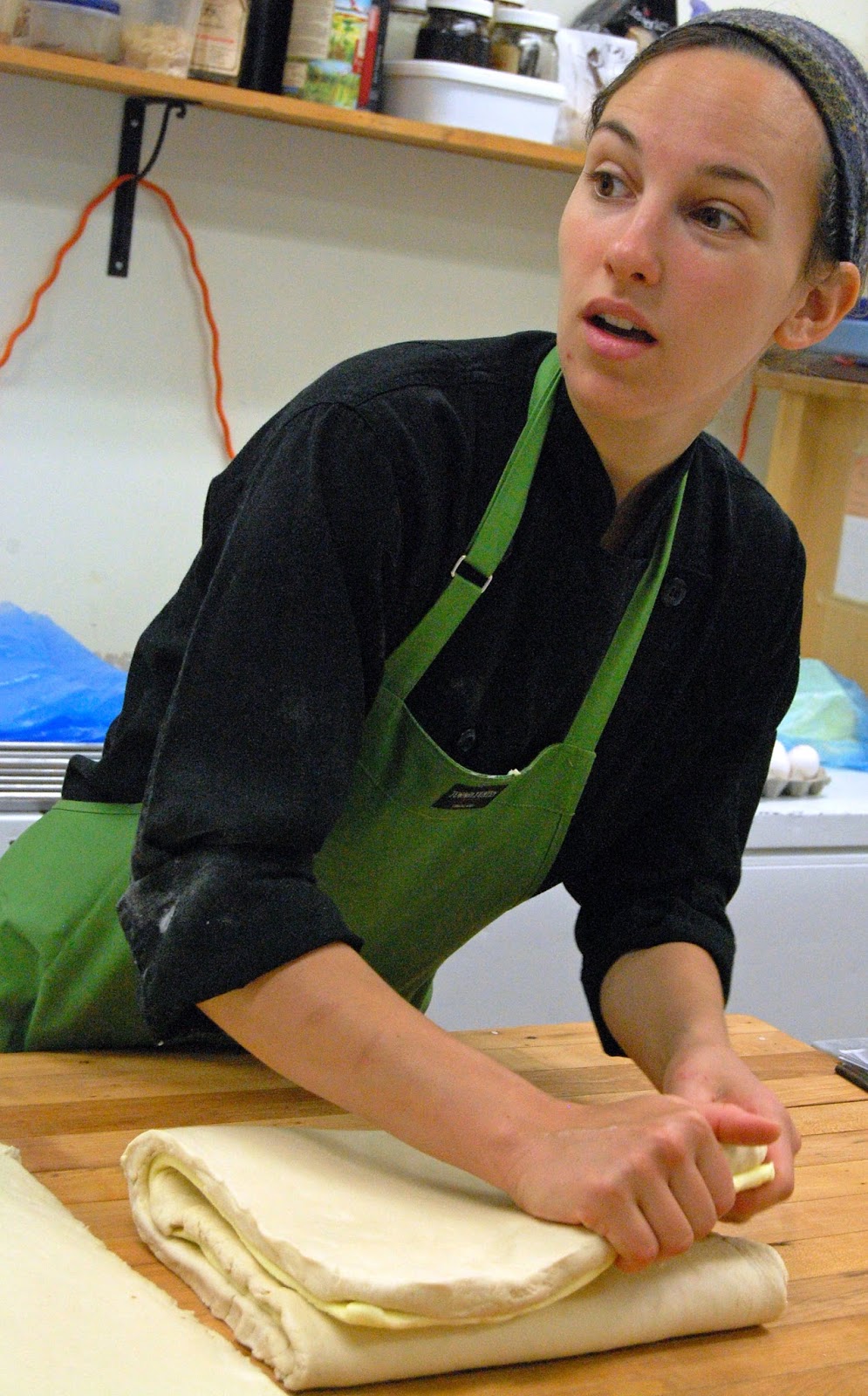 Sarah, the lovely pastry chef at one of the patisseries I visited, showed me how they make croissants, from start to finish.  (I got there at seven in the morning, after they had already been at it for two hours.  This is why I could never work in a bakery.)  See how she's folding that dough together, above?  You might think she's working with two separate slabs of dough, but no—one slab is dough and the other is a dough-sized slab of butter.  This, people, is the underbelly of deliciousness.

The first time I visited this city, I sat by myself at the bar of Au Pied du Cochon, and had a maple-infused beer with my dinner.  There was a stunning maple-custard pie on the dessert menu, and I ordered it even though the menu specified that it was actually for two people.  (In my defense, when I asked how big it was, the server cupped her hands into a circle about the size of a teacup saucer, which I could totally have eaten.  It was twice that size.)  I ate as much as I could, and then took the rest home and ate it for breakfast the next morning, and it was the best breakfast I ever did eat.  Montreal, you have my heart.

Other lessons from Montreal: 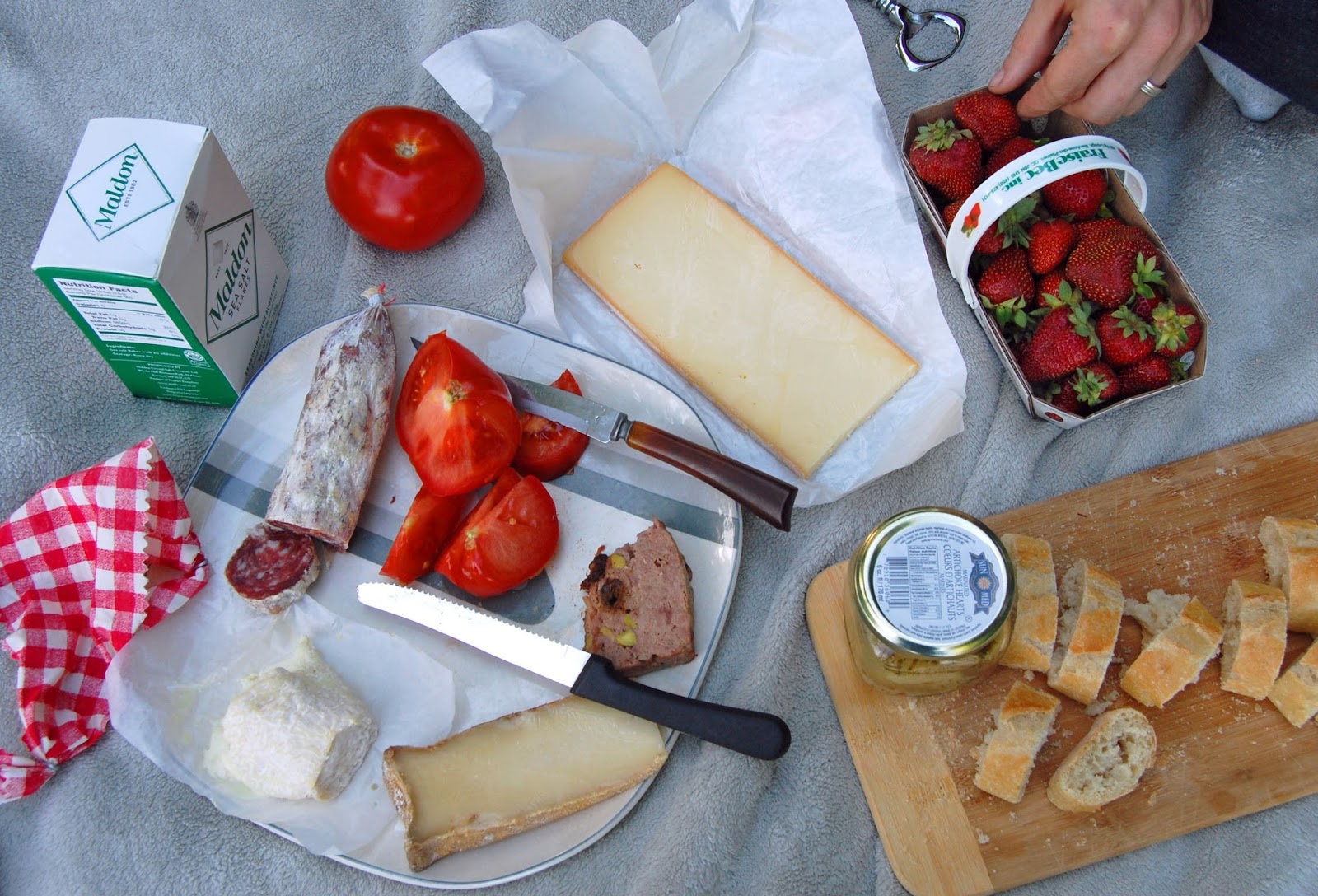 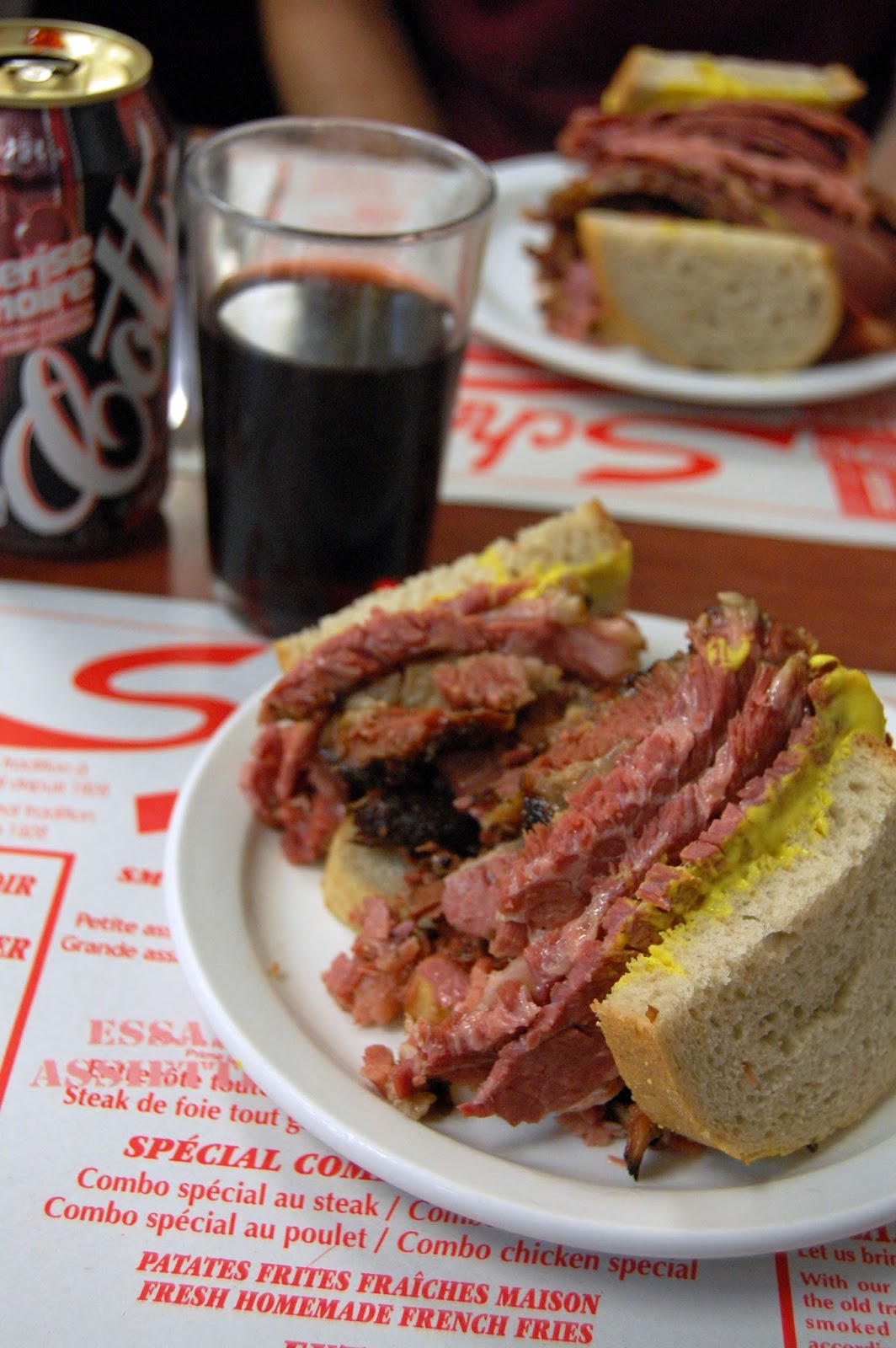 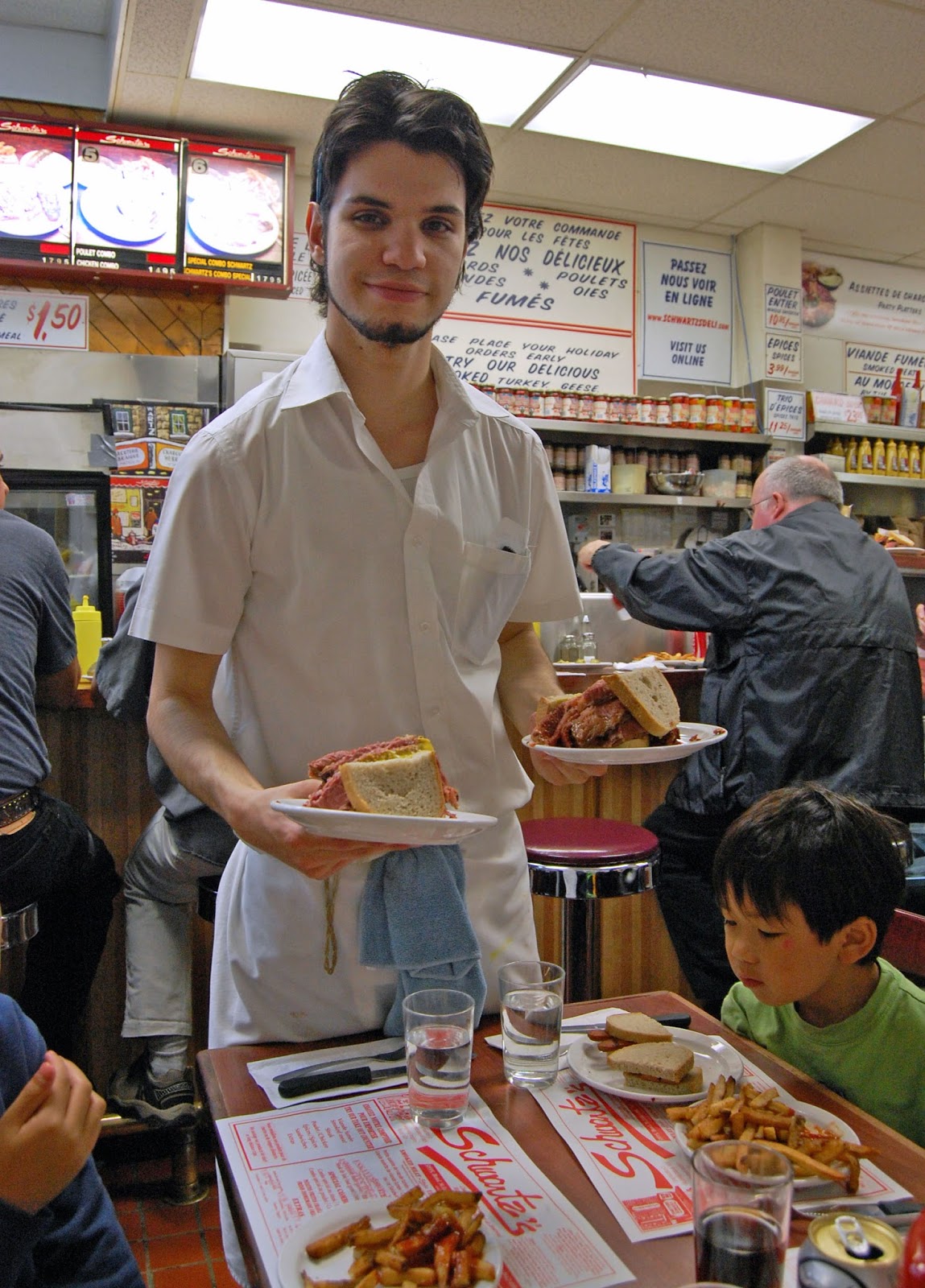 4.  A visit to an outdoor market is not as odious to Merrick as is one to a supermarket.  Marché Jean-Talon was our favorite, firstly because of its size and variety, and secondly because of the super-cool fromageries that let us taste seriously everything before we made up our minds. 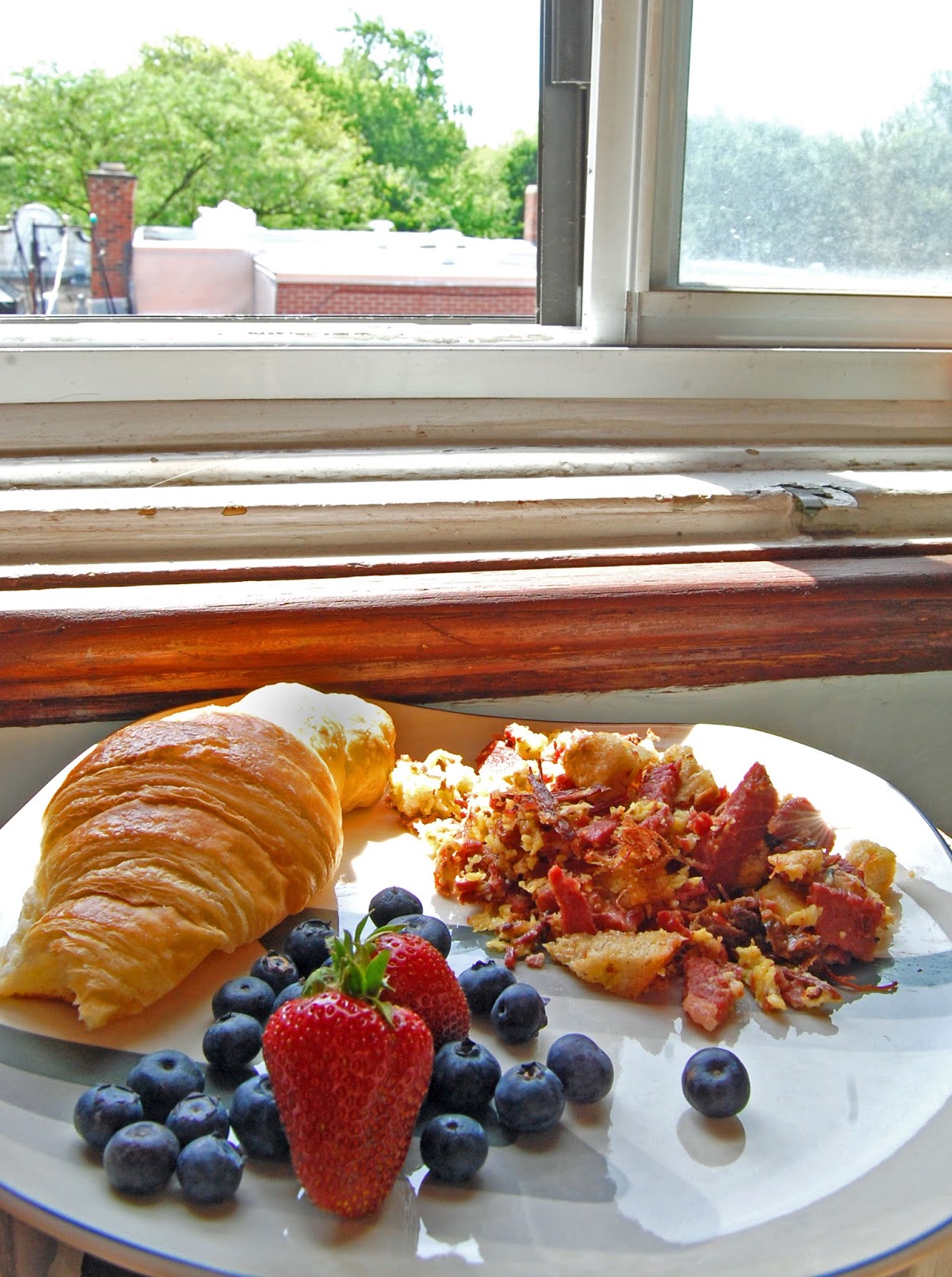 5.  The best way to enjoy smoked meat leftovers (I learned two lessons about smoked meat, because it is seriously that good) is for breakfast the next morning: roughly chop your sandwich, bread and all, throw it into a heated pan, and stir it around a bit until it's warmed through.  Crack an egg (or two or three depending on how much sandwich there is) and scramble it together with everything else.  After a minute or so, turn it all out onto a plate and eat with gusto.

Though the recipe doesn't specifically require you to be in Montreal, it's highly recommended.

More in the eatable series:
Eatable Provincetown
Eatable Madison
Posted by Cristin at 10:54 AM