crostini with ricotta, honey, and lavender 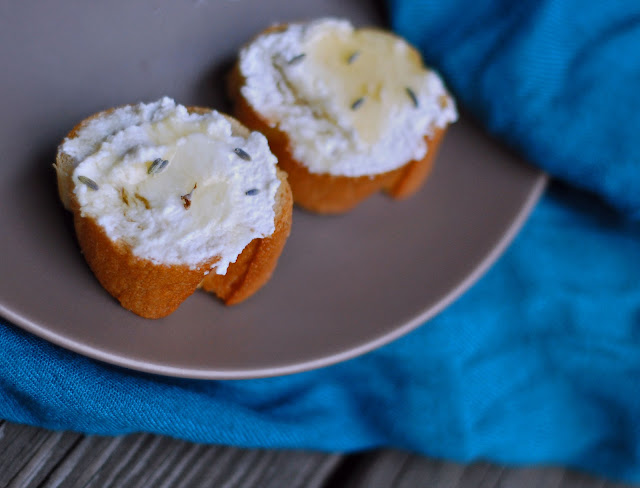 There aren't a lot of naturally purple foods out there.  Grapes, plums, olives, a few berries, a couple of vegetables, a couple of grains.  Barring kool-aid and that one short-lived purple ketchup, that's pretty much it.  And trust me, I never thought I'd be on here lamenting the lack of purple foods in the world.  But that was before Heidi's bridal shower.

My dear friend Heidi's love of purple verges on obsession.  Purple sheets, purple towels, purple notebooks, a purple potato scrubber.  I'm sure that if she could, she would dye her fiance Bill's beard purple.  So naturally, the theme of her bridal shower was "purple."

For me, as the chef du jour, the theme presented a bit of a challenge.  And added to that was the fact that we'd moved into a new apartment only two days prior, the kitchen was in shambles, and I was suddenly, absurdly, trying to cook for sixteen people. 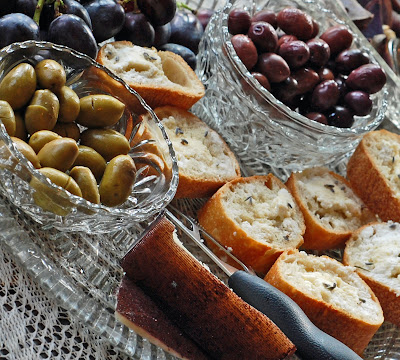 I found a cheese with a purple rind, irresistibly called Drunken Goat Cheese, from a nice long steeping in wine.  I served purple and green olives, and purple grapes.  That's them up above, alongside crostini with fresh ricotta, drizzled with honey, and sprinkled with dried lavender buds.  The crostini are almost ethereal—sweet and fresh, chewy, and effervescing lavender.  It's almost as though you don't taste the lavender at all; instead, it perfumes your mouth with its aroma and you sense that it's there. 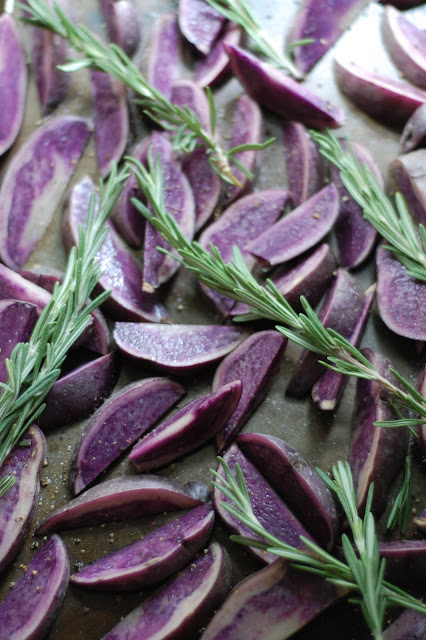 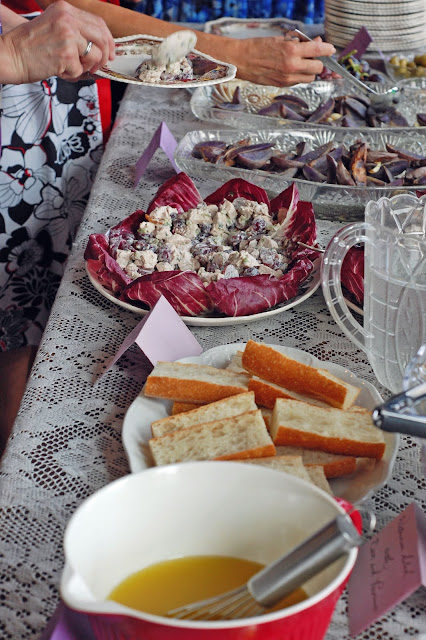 There were purple potatoes roasted with garlic and rosemary, in true Gourmet fashion.  There was a beet salad with watercress and Pecorino, and a divine chicken salad with grapes and walnuts that was the best thing I've made all summer.  That's it above, enthroned upon its bed of raddichio. 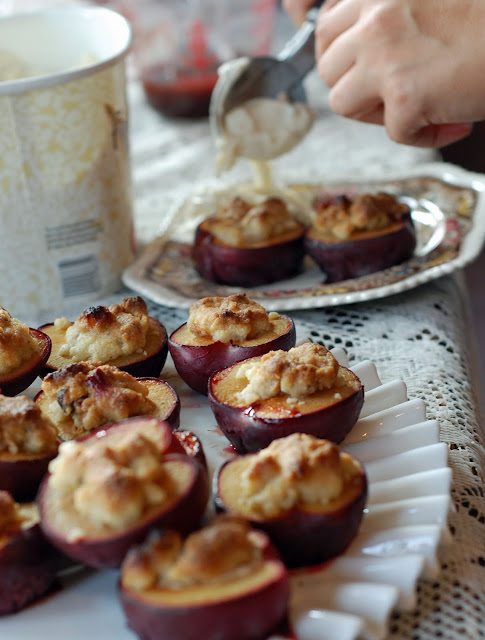 And here, the sweet finish: streusel-roasted plums with vanilla ice cream and a red wine-brown sugar sauce to drizzle over.  Thank goodness for leftovers— I don't know if we'd have made it through unpacking without these plums.

Crostini with Ricotta, Honey, and Lavender
Serves 4, as an appetizer
8 slices baguette, cut into ¾-inch slices
¼ cup fresh ricotta
2 tablespoons plus 2 teaspoons honey
scant ½ teaspoon dried lavender buds
Spread the ricotta evenly over the baguette slices.  Drizzle 1 teaspoon honey over every slice, and sprinkle with a few of the dried lavender buds (just five or six tiny buds per crostini should do it, or the lavender flavor will overwhelm).
Posted by Cristin at 8:25 PM